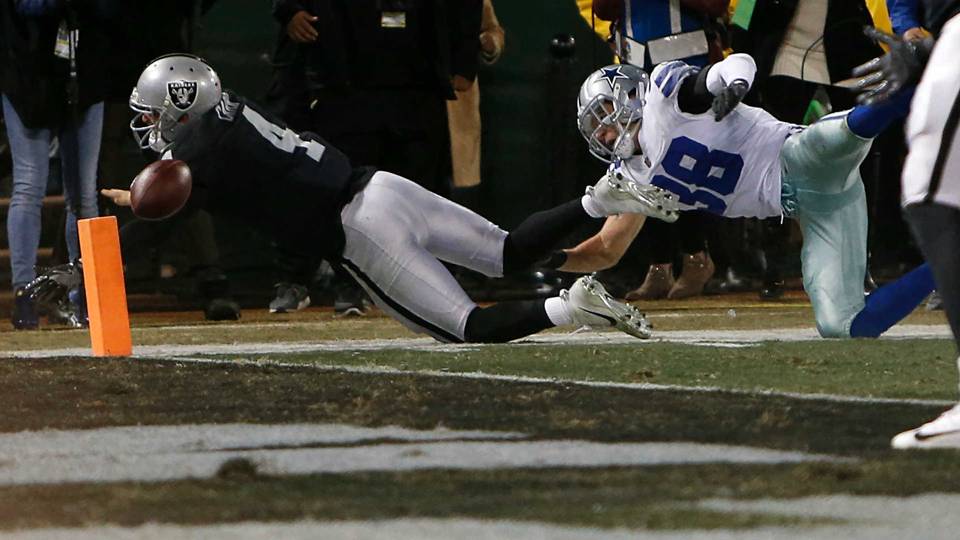 Before the kickoff of the 2017 regular season In David Carr’s 3rd NFL season and Jack Del Rio’s 2nd year as the Raider’s coach, the 2016 Oakland Raiders finally broke their 13 year playoff drought.  The Raiders 6th ranked offense produced 2 receivers (Michael Crabtree and Amari Cooper) to gain over a 1,000 yards.  Before a week 16 matchup with the colts, the Raiders were emerging as a legitimate Super Bowl contender with an 11 – 3 record.  Unfortunately, MVP candidate Derek Carr broke his leg during that game.  The Raiders would not win another game that season and they lost in the wild card game to Houston 27 – 14.  But hope was restored during the offseason as Derek Carr fully recovered from his injury and Marshawn ‘Beast Mode’ Lynch came out of retirement to help his hometown team make a run for that Super Bowl ring.

Week 6 vs Chargers: The Raiders won their first 2 games but now they were trying to avoid a 4 game losing streak.  In the 3rd quarter, Oakland had the ball in the red-zone with a 10 – 7 lead.  David Carr passed to Beast Mode but it landed in the hands of Charger’s linebacker Hayes Pullard for Carr’s 2nd interception of the game.  The Raiders would gain the momentum back in the 4th quarter after an electrifying 48 yard rushing score by wide receiver Cordarrelle Patterson to put Oakland up 16 – 14 but kicker Giorgio Tavecchio missed the extra point.  Towards the end of the game, Phillip Rivers orchestrated a 4 minute Charger drive to set up a 32 yard game winning field goal by Josh Lambo with 3 seconds left.  Oakland lost this game by an extra point in front of the Black Hole Raider Nation 17 – 16.

Weeks 14-15 Keeping Hope Alive: However, Oakland climbed back into the playoff race after a 24 – 17 victory over the Giants to even their record at 6 – 6.  In the following week, the Raiders had a shot to take the lead in the AFC West vs a 6 – 6 Chiefs team that they beat earlier in Oakland’s Black Hole.  But this game was being held in Kansas City’s Arrowhead Stadium where the Raiders haven’t won since 2012.  Oakland’s losing ways in The Show Me State continued as the Chiefs carried a 26 – 0 lead into the final quarter and ended the Raider’s quest to gain their 1st AFC West crown since 2002.

Despite that loss to the Chiefs, Oakland still had a shot for a wild card berth if they won their last 3 games of the season.  But first, they had a must win game in Oakland versus a 7 – 6 Cowboys team that was missing their main man Ezekiel Elliot due to a suspension.

Week 15 vs Cowboys: Dallas jumped out to a 10 – 0 lead in the 2nd quarter after a TD by their backup running back Rod Smith.  Oakland’s kicker Tavecchio blew an opportunity to cut the Cowboy’s 10 point lead right before halftime by missing a 39 yard field goal.

In the 4th quarter, Dallas had possession with 5 minutes left and decided to go for it on 4th and 1 from their own 40 yard line with the game tied at 17.  Surprisingly, the 1st down chains could not determine if Dallas QB Dak Prescott got the 1st down after his quarterback sneak.  Then came the controversial index card measurement, which convinced the refs that the Cowboys got the 1st down to keep the drive alive.  That led to a 40 yard bomb reception by Dez Bryant into the red-zone which led to a short Dan Bailey field goal to give Dallas a 20 – 17 lead.

With 1 minute left, Oakland had possession and was facing elimination from the playoffs on 4th and 10 from their own 45 yard line.  A long pass to Michael Crabtree led to a pass interference penalty on Dallas rookie Jourdon Lewis at the 15 yard line.  The Raiders were in position to win the game or at least send it into overtime on 3rd and 3 from the 8 yard line with 39 seconds left.  David Carr scrambled towards the corner of the end-zone, dove towards the pylon with the ball in his left hand as Cowboy safety Jeff Heath hit him then Carr fumbled the ball onto the pylon to put the worse rule in sports into effect.  Touchback, Raiders lose possession, Cowboy’s ball at the 20 yard line.  The game and season was now over for Raider Nation.

Where Do They Go From Here?  Freezing that moment when David Carr fumbled the ball onto the pylon was the perfect picture to define the Raider’s disappointing season.  Every QB stat from Derek Carr’s amazing 2016 season regressed, especially interceptions which more than doubled up from 6 to 13.  Oakland’s wide receivers didn’t help much by recording the 4th most drops in 2017.  The Beast Mode addition was not as effective as advertised, the Raiders were 25th in the NFL in rushing yards.  Despite having All-Pro DE Khalil Mack, that Oakland defense is still a weakness for this team.  They recorded the 2nd fewest takeaways and were 6th in the NFL in most yards allowed per play.

Now Oakland fired Jack Del Rio for Monday Night Football broadcaster and former Raider coach from 1999 – 2001 John Gruden who hasn’t coached since 2008.  Now Oakland’s general manager Reggie Mckenzie must answer 4 vital questions as they head into the 2018 offseason: Is kicker Giorgio Tavecchio the right replacement for the 39 year old Sebastion Janikowski who was placed on injured reserve due to back issues? Is it time to end Marshawn Lynch’s short tenure in Oakland?  Can they find a few stud defensive players to take the load off perennial pro bowler Khalil Mack? And most importantly, Can Derek Carr have a bounce back 2018 season and return to his 2016 MVP candidate type of play?  If Mckenzie and Derek Carr can provide the correct answers to these questions then John Gruden will be able to make the Raider Black Hole Nation a legitimate Super Bowl contender again.